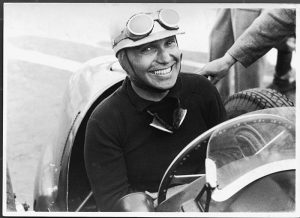 A lot of fans still remember the many victories of my father, Piero Taruffi, the Silver Fox, as the Mexicans used to call him at the time of Carrera Panamericana, because of his precocious white hair, but above all for his astute way of racing. 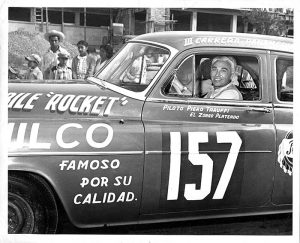 Piero  Taruffi (1906-1988) was one of the greatest motorcycling and F1  drivers during the ‘30s and ‘50s. As the  most famous driver of his time, such as Nuvolari and Ascari, he began to race with a motorcycle, his first love!

Later on, he raced for the major car manufacturers, like Bugatti, Alfa Romeo, Lancia, Maserati and Ferrari. In 1957, at the age of 51, after a long and prolific career, he won the last Mille Miglia, driving a Ferrari 315 S 4000 Scaglietti.
His life was based on the futurism myth, which is the pursuit to reach the speed by any means. Excellent driver, engineer, record holder, test driver and designer, Ferrari noticed him thanks to his engineering knowledge anddecided to give him his first opportunity to win a race with an Alfa Romeo. My father won that race, becoming a star.

The Silver Fox did not go fast only on the circuits, but especially on the road, having won all the most famous races in the world such as Carrera Panamericana, Tour of Sicily, Targa Florio and  Mille Miglia. Tazio Nuvolari himself, his friend and rival, considered Piero the strongest rally driver in the world.  As a tester and design engineer, he established numerous world records, such as – in 1937 – the 274 km/h (kilometer flying start) with the motorcycle Rondine Gilera. 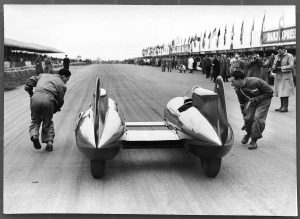 In 1952, with the his famous Bisiluro (Maserati 4-cylinder motorised of 1720 cm3), he established another world record on the Fettuccia di Terracina touching a maximum speed of 313 km/h!

My father was also a forerunner of safety in the circuits, and  the first F1 driver to wear a semi-rigid helmet and security belts.

As a journalist he also wrote different books, one of which “The Technique of Motor Racing” became a text study for the future pilots. 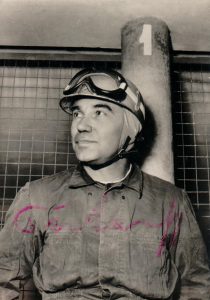 As an engineer, he designed several circuits including Vallelunga (Rome), Misano Adriatico (Rimini), and also Japanese circuit such as Suzuka, Izu and Funabashi.

In 2007, for the centenary of his birth, ACI (The Italian Motor Club) titled Vallelunga circuit to my father, and today a collection of memorabilia – including his Mille Miglia road book, cups, trophy, images and projects – are jealously guarded inside the pressroom of “Piero Taruffi Vallelunga Circuit”.

Nowadays Vallelunga, which hosts F1 tests, World Superbike championship and many other international events and races, has become one of the most updated Safe Driving Center. Just what my father dreamed 40 years ago! 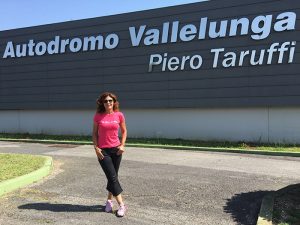